Select any forum below to ask question

Login to Ask a Question or Reply

I need to understand why is that so, and how do we make datapoint also have color blue which is of series 2?

In the JSFiddle you have shared, you are using lineColor which changes the color of line not the marker(dataPoint). To change the marker color as well, you can set the markerColor. In your case, you can use color property to set the color of both line and marker. Whenever there are multiple series overlapping each other, the last series will be shown and on hovering the marker will be shown for first dataSeries.

Also what I want to achieve is:
1) When i hover over the data point, since it is series 1 how do we make other series (in our example series 2) with less opacity and series 1 with more opacity.
2) The example has only 2 series, but we can have multiple series and only the highlighted series should have a greater opacity as compared to others.

I suggest you to use legend to hide and unhide the dataSeries whenever there are series overlapping each other. 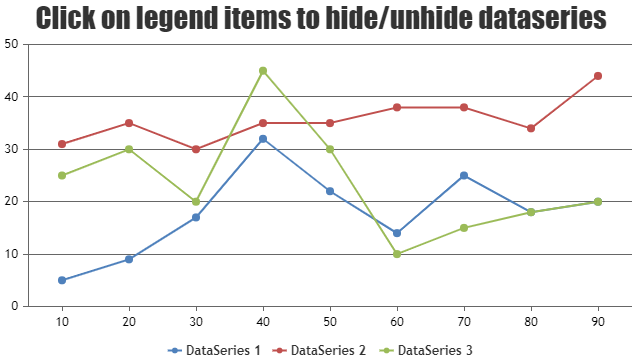